One of the those Nights

I guess it's going to be one of those nights. I've already taken my regular medicine plus two Tylenol PM, and I find myself sobbing in bed. This week has already been a downer. I have not been busy enough and I've found myself wandering around physically and mentally unmoored. But tonight the memories are just overtaking me. Remembering Memorial Day 2013 when I went down to Springfield. The plan was for me to buy steaks and Adam was going to invite friends over to grill out. It didn't happen because the weather turned bad and a tornado came through Springfield. He took me the Chesapeake instead, and if I remember correctly, it was the first time he insisted on paying. I thought that was such a cool turning point in our relationship and his adulthood. When we got back to the apartment, my mom called to say Uncle Cal had just died.

For Adam's birthday in 2014, I went down to visit and we had lunch at the Dubliner. It was kind of windy and cool but we ate on the patio. I remember him wanting to show me pictures on his phone of a recent trip to St. Louis because as he said, "You don't really know about my life here in Springfield." Afterwards I bought him a nice Giant bike as his last one had been stolen out of his garage.

One holiday the family was all playing a game called Beyond Balderdash where you are given an obscure date, a name, acronym, etc. and everyone writes what they think the real answer is in order to fool everyone into voting for theirs as the actual answer. Adam was the first one of us to have a smart phone, and he was googling some of the info, because the real definitions were weirder than anything we could think of. And sure enough, there was a man who had three legs.

Sunday October 26, 2008, Adam's first semester at UIS, Eli and I drove down for a David Crosby and Graham Nash concert at Sangamon Auditorium. I think we all appreciated this show and the fine musicianship. Mom and I had stopped for dinner with Adam earlier that month on our way home from a Laura Ingalls Wilder tour to Missouri. Mom's choice was Red Hen (close to UIS and sit-down). After she grilled the waitress about the canned green beans, Adam warned her, "Grandma, never give the wait staff a hard time- they might do something to your food."

I pray to God that you are safe and know that I gave you the best of my love. 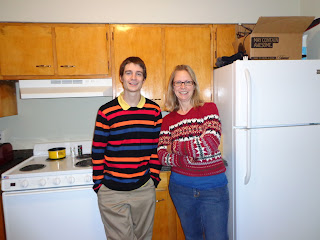 He knows. He always knew.