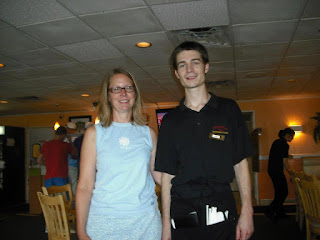 I miss this guy something fierce tonight, today, all day. What was originally going to be a 3 hour workshop on Cultural Diversity in Springfield followed by lunch at Little Saigon with our favorite waiter turned into an excruciatingly boring presentation followed by an appointment with the "Evidence Section" of  the Springfield Police Department to collect Adam's last effects, otherwise known as a cell phone and what they have been calling a 'journal.' I inadvertently learned what the police do with firearms used in suicides (keep for at least one year and then have them melted down). After that painful interaction and seeing the original notes for the first time on a small white tablet, it was hard to keep it together. Thank you to J for accompanying me on this unexpected journey.

We headed over to Little Saigon which I really wanted to follow through on. I had the uniforms washed on hangers to return if they could make some use of them. No one seemed to recognize me so we were seated at a table and placed our order with "Chris." Steamed dumplings and Panang Curry lunch special with egg drop soup and a small egg roll. While we were waiting for our food, I took the shirts up and greeted the hostess/manager (I'm sorry I do not remember her name); we hugged and she took the shirts from me. J and I both enjoyed the food, and on the way out the staff all said good-bye and I swear, An looked like he was going to cry which made me start to cry.

J wanted to check out the little market across the street so we walked over. By this point, I was starting to think about how beautiful the day was, but how Adam would never be riding his bicycle on the rails to trails path, never going into work again, never parking in the back of the lot. I thought about how it must be hard for his co-workers who were used to seeing him everyday to be reminded of his absence. It's getting real for me.

I put the phone together with the charger I found in his bedroom and have looked through some of the text messages. Pretty predictable stuff. He had gotten fitted and paid for his tux for Eli's wedding. His last message out was 1/29/16 at 11:03 p.m. The photo app needs an update before I can look through his pictures which I do not know how to access. I just need to know everything I can to try to put the pieces together. It's a jumble right now and I just want to obliterate everything from my mind and maybe sleep for the first time in three nights.
Posted by susan d at 3/11/2016 10:24:00 PM

Crying, remembering the time we ate there with Adam as our waiter. He was so serious about not spending too much time talking as he was working.

I love seeing the pictures of you and Adam here!!! Your beautiful baby boy! You are a wonderful mom always, as evidenced by your loving memories here. Love and prayers from Mary Lou and family

Again, I'm so sorry for your loss, Susan. This makes me think of a film I heard about just last week called Ripple Effect. How one person has such an impact on so many people it just ripples out to places unimaginable. Even to me, across the country, someone you've never met in person. Like the butterfly effect, right? One of my best friend's daughter is struggling with depression. My heart aches so much for their struggles, and now yours, and it's inconceivable to comprehend the heartaches you are all going through with as much sadness I feel. I think in one of your posts your sister said something about this that I could relate to a bit.