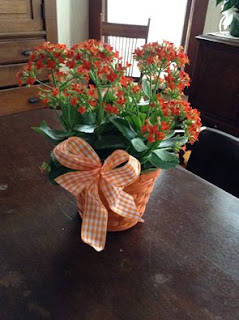 The day started with checking off one more item on the list to settle Adam's affairs. Got his taxes done with our fantastic accountant who makes everything so easy. His oldest daughter graduated with Adam. I can't tell you how relieved I felt when that was done.

Then to get ready for my visit with T. I want to be careful to respect her privacy which I have probably already busted, but hoping she will forgive me in my quest to share as much and as openly as I can. She was looking for closure, as she had not been able to attend Adam's service, and some answers. I was looking to learn about a side of Adam I didn't know. It was deep and thorough and cleansing. I think she got what she was looking for and I was able to say things and show her things I don't share with most people.

Miss M (my Little Sister of five years) came over and we played her Logo game with my entire family. She got a hysterical kick out of Chris' dramatic reading of the brand name trivia questions ("Everything tastes better when it's sitting on a ____?"). She cheered him on when it was his turn to answer: "Come on Chris, you got this, you're really smart!" One bank of questions was devoted to "Peeps," Adam's favorite Easter treat (sign?).

We had a huge fire in the backyard last night, wide as it usually is tall. The neighborhood cat was sniffing around Pearl's gravesite by the apple trees. Betsy reminded us that one of those trees was planted for Adam when he was a baby. We were talking about the roasted squirrels we had thrown in the last two pyres. WARNING: morbidity follows. For the second time I had the terrible image of what Adam's cremation might have been like.The first was when I saw the funeral director who had picked up Adam's body from Springfield driving down the street in a pickup truck. The reality of what really happened to his physical remains is one of those things I try to block out as much as possible. 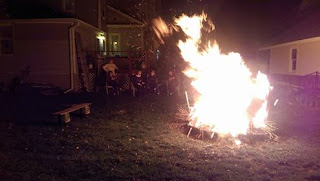