I promised my dear friend Grace I would not post pictures of her or her beautiful new baby on the internet. I don't think the Chinese even want pictures sent via email or Skype. But her baby girl born September 2009 was the hit of Thanksgiving even if they only stayed an hour or so. There are definitely some cultural differences in child rearing. Well, she is so loved and protected, it's sweet.

Here is Great Uncle Cal who came over and when told Pat and Boy15 were playing ping pong said he would take on the winner (at age 84). 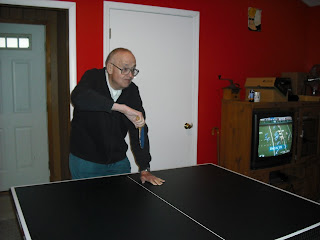 I ate like an absolute animal over the long weekend. We had a couple of nice long walks. On Saturday the weather was epic (as the young folk say), 60 degrees and sunshine. We also played a lot of games, our usual past time. Mancala (my new obsession), Taradiddle (really stupid but funny), Cranium, and Sporcle (the addictive internet quiz game). 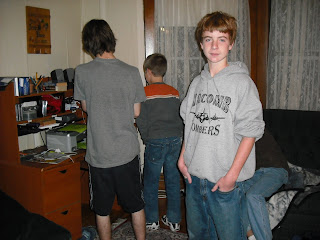 "Gathering around the computer for another round of Sporcle"

On Wednesday I went to "New Moon" by myself since I couldn't find any suckers to go with me. It was awful in case you are wondering. I am through with the whole Twilight thing. I am trying to keep abreast of what the students are into, but this has gone far enough. On Friday night most everyone went to "Fantastic Mr. Fox" a cute animated farce based on a Roald Dahl story. Can't go wrong there. It was enjoyed by all ages. Whistle, cluck cluck...
Posted by susan d at 11/29/2009 07:10:00 PM 2 comments: 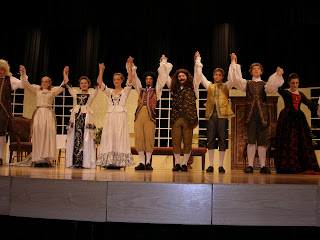 Boy 16 is in the tan knickers, purple vest, somewhat in the center. See below, Tartuffe with dear Elmire. 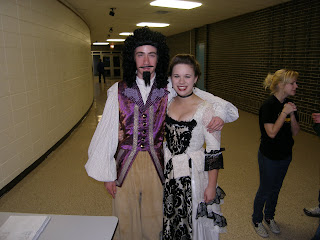 What an icky, wet day. I will say that we took in a lot of theater this weekend. Saw a college production of Miss Saigon. It was hard to buy into when the Vietnamese and Americans all looked the same. There was the cutest 3 year old boy who played the child of the American G.I. in Vietnam and Kim, the local girl. Pat had some difficulty sitting through it, but he has really gotten better. No sighing, head rolling, or loud criticizing.

That was Friday night. Saturday we went to Tartuffe at the high school in which Boy16 played the lead, Tarfuffe, a pious scoundrel. I will tell you, this 17th Century French play in rhymed translation did not draw a crowd. It was disappointing because they worked very hard to memorize and act out this ancient material. Why the director chose this play, no one can figure out. He was obviously amused by it, and I do think the kids who were in it thought it was funny and learned a good bit of culture from putting it on. Wish I had a picture because the costumes were top notch. Boy15 and Nephew10 went to their 'happy place' and rejoiced when it was over. Nephew10 said in his best french accent, "and after a million years, it was finally over."

Today was only good for laundry, nappy and a bit of weightlifting. I have to get back on track after a mild but lingering flu and accompanying binge eating.

For those who asked, Uncle Cal seems to be adjusting to Macomb. The aides at Bickford seem to think he is a real hoot. He does have a unique sense of humor. Someone he managed to pass his driver's test in IL (drivers beware) and signed out of the building Friday for "nonsense reasons." He drove his van around for two hours looking at crops and finding his way around town. I found out he is not on morphine anymore, so at least he's not driving heavily drugged. The Parkinson's is bad sometimes, and we prefer to drive him ourselves when he is going with us.