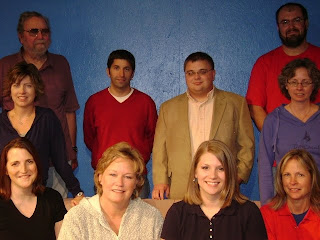 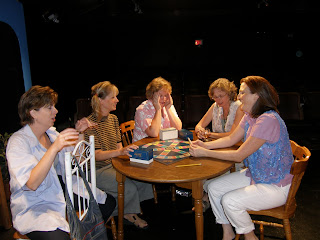 Top picture: cast of Macomb Community Theater Odd Couple (Female Version) 2009. The two giants are the stage manager and the director (my dad). The two short guys are the Spanish brothers who live upstairs.

Second photo: the girls playing their weekly game of Trivial Pursuit. They keep saying, "We should get together and just play it." But there never seems to be enough time.

Opening weekend went well, particularly Friday was a great audience. Laughed a lot. I was surprised at some of the things I think are really dumb, including my own lines.

My brother arrives from NH tomorrow and my sister arrives Friday for my debut performance. I have friends coming from my past work on Friday to the play. It is going to be another really busy weekend. Last two weeks I had rehearsal or performance every night, 3 plus hours. It was exhausting. This week has been nice to relax as we don't have practice until Thursday.
Posted by susan d at 9/23/2009 06:44:00 PM 3 comments:

I am just watching an old movie (I didn't realize how bad a movie 'Never Been Kissed' was) and waiting for the 3 ibuprofens to kick in and cure my headache. I guess I am still a little down in the grumps. I am alone again on Saturday. Pat went to the soccer tournament again this weekend. Just so you don't think I'm totally evil - oh here comes that awful scene where Drew Barrymore and the guy ride on the ferris wheel, that I do remember being terribly sappy and stupid- I did go to soccer last Friday night out of town and the home game this week. We had rehearsals every night this week so it's been pretty busy.

This morning I went to a good workshop training on keeping lesbian, gay, bisexual and/or transgender kids safe in school. Our society and schools are so totally heterocentric I don't know how anyone does manage to come out as GLBT.

After that there was a presentation by a mother and aunt of a boy who died playing the choking game. It was really heart wrenching.
Posted by susan d at 9/12/2009 04:54:00 PM 1 comment:

A whole week has gone by without a bloggy event. The weeks go so fast. I was so looking forward to the four day weekend (I know I am spoiled!), now that it's here I don't feel that happy. There's something definitely the matter with me. I go from one thing to the next, enduring each one and waiting for the next. All this stuff should be fun, but I ruin everything with my mental state.

We had dinner with my parents tonight. Then we played a very old game called Facts in Five. It's like Scattergories, only harder. It has categories like Living Statesmen/Politicians. You can choose male/female/American/foreign, depending on how hard you want to make it. Then you pick five letters and try to fill in the grid. We had Sports Managers/Coaches, male, and Classical Musicians, dead. Boy15 and Grandma were the only ones who really liked it, of course, she got by with Barry Botts for athlete, male, because we knew she meant Bonds. My dad absolutely hates it because when a timer is on, he can't think and goes blank. Oh, by the way, he fell while getting off his bicycle yesterday and sprained his wrist really bad, and got a bloody arm, because he is on Coumadin, he bleeds like a hemophliac.

Boy16 had his marching band debut today at he high school football game and Boy15 had a HS soccer tournament Friday-Saturday. I had lunch with friends and got my oil changed, so really, everything is good.

Boy15 got his driver's permit this week, and hasn't been behind the wheel yet. So, I took him out in the parking lot. He seriously didn't know about turning on the lights, putting the car in drive or reverse. I am the least patient person on the planet. It seems like the other two had some prior parking lot experience, or farm driving or something. I guess the baby never had need or desire of trying it out. I did get him to reluctantly drive around the block and park in the driveway. He had about five feet on one side and five inches on the other.